Getting The Dirt On What’s Really Organic

With consumption of organic food throughout the United States on the rise and potential legislative measures, such as California’s Prop 37 and private retailer Whole Foods instituting a third-party organic certification system, consumers are more interested in what their food and other products contain than ever before. Idaho news station KTVB recently investigated the cost of local organic foods and what goes into ‘organic’ certification. As of 2008, USDA numbers show Idaho ranks in the top ten states for organic food sales with more than $71 million in goods sold each year. How Do You Know It’s Organic? by Jamie Grey
“More and more people are concerned about where their food’s coming from, and how it’s been grown and what’s gone into it,” said Ariel Agenbroad, Horticulture Educator at the University of Idaho Extension Center in Canyon County.
Agenbroad says people are choosing to buy organic for a variety of reasons, including personal health beliefs, concerns about sustainability, and worries about food treated with chemicals.
Organic vs. Conventional: Cost comparison at the market
KTVB did a quick cost comparison using two grocery stores to check prices of organic produce and conventional produce. Calculating a simple average, recent prices showed organic produce generally costs around 50% more than non-organic.
For example, we found non-organic strawberries selling at $2.00/lb, while organic strawberries were $2.99/lb. Non-organic raspberries were $2.99/lb, while organic were $3.49/lb. The most drastic difference was green peppers: non-organic peppers sold for 59 cents each, while the organic variety cost 153% more at $1.49.
While those prices may shock some, we did find some items priced equally or cheaper. For example, organic navel oranges and organic kiwi fruits were priced lower per pound than their non-organic counterparts at Albertson’s.
Is it really organic?
“You can trust the label — that if it says ‘certified organic by’ — that they are being inspected,” said Brandon Lamb, organic program manager for the Idaho State Dept. of Agriculture.
Lamb and other inspectors check farms to make sure they’re meeting USDA organic standards.
“How they’re going to comply with those rules and regulations, how they’re going to manage for pests, what their plan is for soil fertility, what their crop rotation is,” Lamb said.
Organic farms earning more than $5,000 a year have to get certified through the USDA standards, proving they’re using required sustainable farming practices. In Idaho, there are more than 200 certified organic operations, and most are growing crops.

How does a farmer or rancher get USDA certified?
Lamb allowed KTVB to accompany inspectors visiting a local vineyard for an organic re-certification inspection. Rocky Fence Vineyard in Emmett grows organic wine and table grapes and has always farmed organically. The vineyard sells to a local winery and ships table grapes internationally.
“These grapes here are just from the Idaho sun, and from the Idaho mountains,” grape grower Michael Medes explains.
We found the several-hours-long inspection got down to the nitty-gritty — from checking extensive records, receipts and plans, to walking down every row of grapes looking at the vines, to checking sheds, equipment and sprays. The idea is to check for sustainable farming practices at every level of production.
In a certified organic operation, natural pesticides, fertilizers, equipment, and other implements are allowed unless otherwise prohibited by the USDA. Synthetic products are not allowed unless specifically listed. Idaho’s organic program (1990) is older than the federal accreditation program (2002), and regulations are continually getting tighter.

Farming organically costs significantly more
The USDA recently surveyed farmers nationwide, and found organic operation and production expenditures around 60% higher than conventional expenditures. The average organic farm spends $171,978 per year, while other farms spend an average of $109,359.
“If I could use a herbicide, it would be a lot easier,” Medes said. “If I have to treat my vines when I have problems, the treatments usually cost about three times more than conventional and are about a third as effective.”
Medes showed KTVB a gallon container of natural, USDA organic approved treatment that cost between $200 and $300 for one container. Growers say the higher cost has to be passed on to consumers, though they say the product from using organic practices is worth the price.
“We try to get our grapes tasting better so it’s worth paying more. I mean that’s our goal,” Medes said.
Since consumers do sometimes pay more, organic growers say USDA certification is proof consumers are getting their money’s worth.
“I’m glad they’re real strict, because if the consumer’s going to spend for organic produce, they should be protected that we’re not spraying these things,” Medes said. 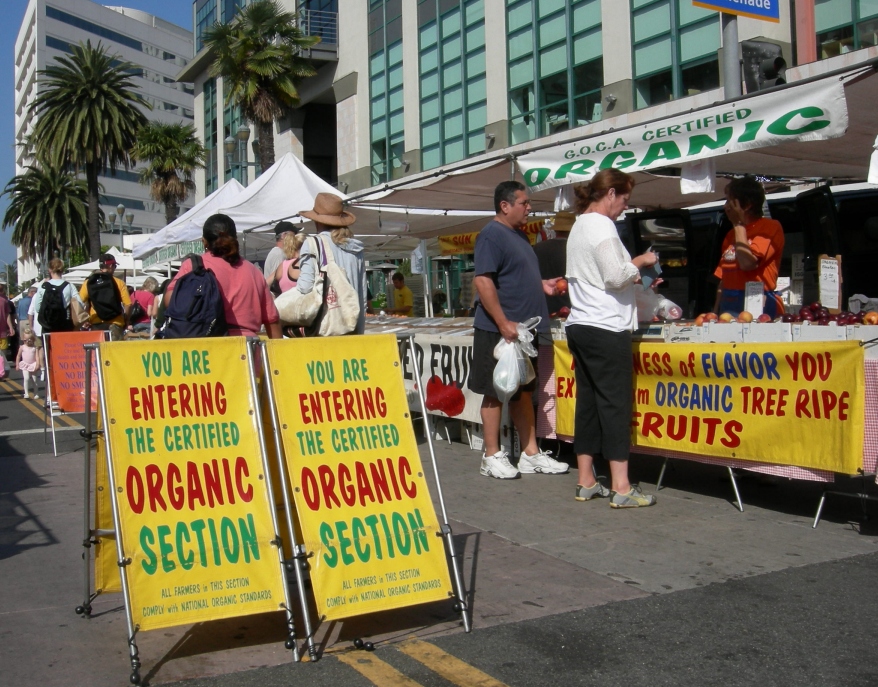 Dept. of Ag: Other terms like ‘spray-free’ are not regulated
KTVB checked out several food labels at a local farmer’s market and saw words like “natural,” “no spray”, “sustainably raised” and “country organic.” Experts say those labels could mean the farmer is using organic practices, but they may not be certified or regulated.
“Consumers want to look for the organic label. [There] is the USDA issued label, and only growers that have gone through the process of becoming certified and gone through the paper work and had inspections done on their farm have permission to use this logo and call their produce certified organic,” Agenbroad said. “Lots of other people will use terms like ‘natural’ or ‘no spray’ or ‘organically grown’, but those don’t come with the seal, so it’s not an absolute guarantee.”
Knowing that information, experts suggest you check labels and ask questions to make sure a farm’s growing practices match up with your personal beliefs about food.
“[If] You’re buying based on your values, and if it’s important for you to see farming happen in that way, or support a grower who uses those principals or practices, then it is worth the money to you,” Agenbroad said.
Small farms don’t have to be inspected to use ‘organic’ labeling
Lamb says small farms earning less than $5,000 a year don’t have to get inspected to advertise that they’re organic, they just need to register with the state. Lamb’s office handles those applications as well. Usually, he says getting a small farm organic certificate is just a quick check and registration process, and does not include inspection.
Boise’s Capital City Market requires proof of USDA organic certification from anyone who wants to sell using the term ‘organic’. Other terms, like natural or spray-free aren’t checked because the market says there’s really no way to check because there aren’t standards or certificates for those terms. Fines, penalties and suspensions for incorrect use of ‘organic’ label
Growers and producers can be denied certification, have their license suspended, or issued a notice of non-compliance with the USDA if inspectors find violations with their methods.
“Every year we have approximately 10 to 15 operations that are suspended, but typically that’s for failing to apply,” Lamb said.
Lamb and his office also investigate if people report problems or suspect an organic farm or operation is out of compliance. He says they usually investigate complaints within 24 hours.
Additionally, the USDA issues fines to growers or operators found to be using the “Certified Organic” label fraudulently.
New organics health study by Stanford
Looking at the health aspects of organics, a new research study by Stanford University shows practically no nutritional difference between organically and non-organically grown produce — but does show a big difference in the use of pesticides.
Organic fruits and veggies have a 30% lower risk of pesticide contamination than non-organic. However, no studies found specifically that pesticides at non-organic levels cause harm.
Scientists also looked at pork and chicken. They discovered there’s a 33% greater risk of antibiotic-resistant bacteria in non-organic pork and chicken. They also found higher levels of omega-3 fatty acids in organic milk and chicken.